The process of synaptic transmission, including reference to neurotransmitters, excitation and inhibition.

Synapse: When there are chains of neurons, there are (tiny) gaps between them i.e. they don’t actually touch. Any neuron will have 2 synapses: 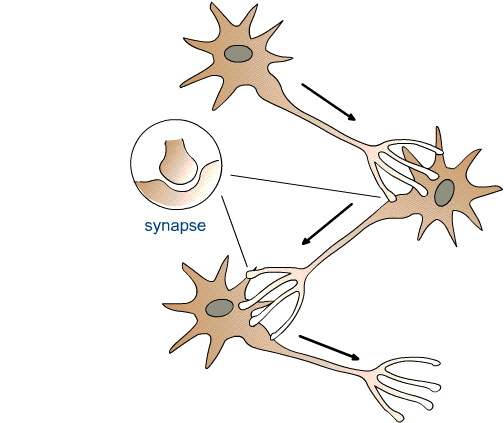 This process occurs at high speed. It should be noted however, that not all messages prompt activation in the same way. It depends on the action-potential of the post-synaptic neuron and the message type received. Only certain neurotransmitters can unlock a message channel in certain receptors in the post-synaptic neuron (operates under a lock and key system  (only certain keys will release the lock). When the right key (neurotransmitter) meets the right lock (receptor) a specific ion channel in the membrane is opened (like a door). Ions then flow through the membrane into the neuron along their specific pathways. This flooding of ions can cause a potential in the dendrites. These potentials can be excitatory or inhibitory.

An excitatory neurotransmitter binding with a posy-synaptic receptor causes an electrical charge in the membrane of that cell resulting in an expiatory post-synaptic potential (EPSP).

For example, noradrenaline is an example of an excitatory neurotransmitter as a result, it is the ‘on switch’ of the nervous system this increases the likelihood that an excitatory signal is sent to the post-synaptic cell, which is then more likely to fire.

Make it less likely to fire and, if the message is likely to be stopped at the post-synaptic neuron, it is called an inhibitory synapse.

Inhibitory neurotransmitters are generally responsible for calming the mind and body, including sleep and filtering out unnecessary excitatory signals.

For example, GABA AND Serotonin are examples of inhibitory neurotransmitters they are the nervous systems ‘off switches in that they decrease the likelihood of neurons firing.

We're not around right now. But you can send us an email and we'll get back to you, asap.